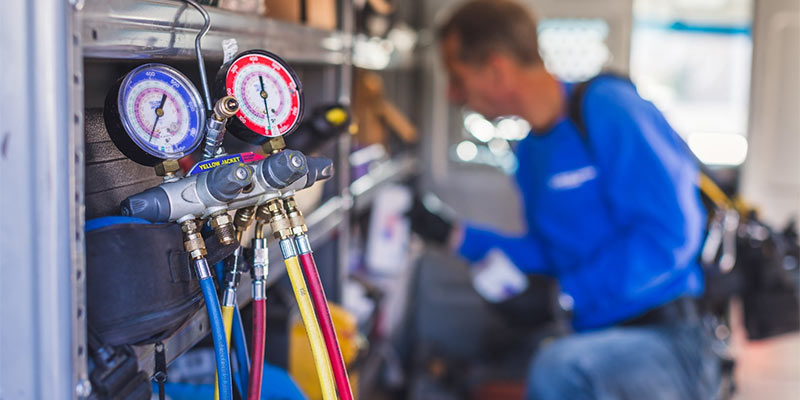 Ah, summer! There’s nothing quite like enjoying a new home with a backyard get together, including a refreshing dip in the pool with friends, cold drinks, and idle conversation. Life is bliss until a deafening roar from the HVAC compressor erupts from the side yard, interrupting the party. Not only does it turn small talk into a shouted exchange, but the barrage continues for a full fifteen minutes. The relief when it stops is palpable–until it starts up again fifteen minutes later.

The compressor portion of the home’s HVAC unit can sound a lot like someone landed a Learjet beside the house. The causes of the noise can be attributable to any number of things, including old age! The first thing to do is to have a reputable HVAC company come out and assess the reason for the racket.

At that point, the homeowner will have a better understanding of the problem. It is sometimes possible for an HVAC electrician tech to get the sound under control; for example, if the compressor needs oil or if the housing has a loose screw.  But, sometimes the problem isn’t as easily rectified. What the homeowner does at that point depends on several factors.

Perhaps the unit is merely old and in need of HVAC replacement. However, if it’s less than ten years old, a homeowner may understandably balk at the idea of replacing it, notably if they just purchased the house and are too fiscally underrepresented at that point to undertake another big bill or loan payment.

If the HVAC unit is relatively new, a four-foot high wall or even a fence can be built between the unit and the backyard, which will dull the noise considerably. If the homeowner doesn’t have the necessary skills, an experienced landscaper or handyman can build a barrier to match the style of the house.

If a wall or fence is impractical, planting a ‘wall’ of broadleaf shrubs will also cut down on the sound. Bigger leaves and fuller plants will absorb sound better than plants with small leaves, but it’s essential not to plant them too close to the unit, as they can block the airflow of the compressor.

Regardless of the cause, the HVAC unit should be serviced every year, optimally before the summer months, so that it can be inspected, cleaned, and maintained to ensure maximum functionality and prevent potential problems. If the homeowner decides to replace the unit, they will find new HVAC units are markedly quieter than their older counterparts.