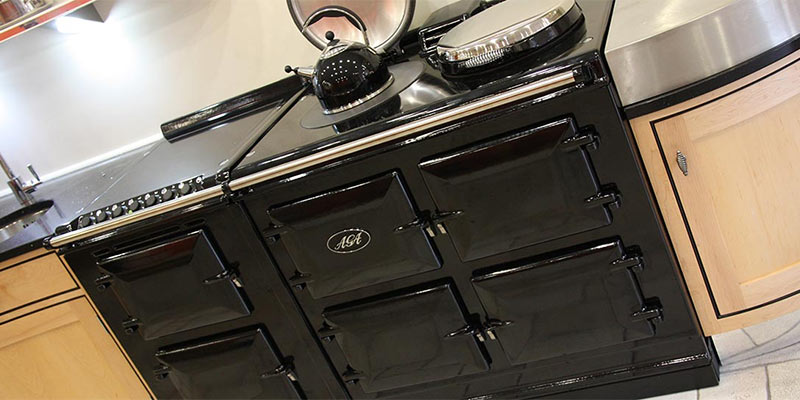 A look at the pros and cons of the electric Aga.

The term “household name” tends to get bandied about somewhat loosely these days, however Aga have established themselves over nearly a century as exactly that; a name synonymous with quality and reliability upon which thousands of households have placed their trust and a brand which most of us will have encountered at one time or another, despite their market being considerably more “niche” than the majority of multinationals which proliferate today.

You may be surprised to learn that the original design concept for the Aga was the brainchild of a blind physicist. Forced to stay at home after the accident which cost him his sight Gustaf Dalén was dismayed to discover how exhausted his wife became each day simply from cooking and he set out to develop a stove which could cope with a range of culinary tasks in combination whilst simplifying the process as a whole.

His idea used the principles of heat storage, combining a heat source with two ovens and two large hot-plates into a single unit and by the early 1930’s Agas were being manufactured under license here in the UK.

Since then Agas have become something of a focal point in many a household, providing heat and sustenance to a standard most owners would argue remains unrivalled. So what are the advantages of an electric Aga, exactly?

One of the major criticisms of Agas as a whole had always been that they were far from energy efficient compared to conventional ovens of the time. In fairness Aga have never shied away from such criticism, indeed their own figures for expected energy consumption for gas and oil variants tended to support the impression that they were “energy hungry” with the traditional two-oven Aga capable of consuming as much gas in a fortnight as a conventional oven and hob might need for a good 12-18 months of operation.

This perception of Agas being astronomically expensive to run has always been somewhat mitigated by the quality of the product. Aga themselves would point out that over the lifetime of the cooker an Aga represents excellent value, an Aga being a long-term investment designed to give the owner lifelong service as opposed to conventional ovens which will need regular replacement (10-15 years is regarded as a good lifecycle for most ovens).

An electric Aga certainly levels the playing field in terms of economy, with a single 13amp power source providing all the energy required for operation. In addition electricity is regarded as a far “cleaner” power source than either gas or oil with no need for any additional flue for channeling away fumes etc.

This makes an electric Aga cheaper, easier and more convenient to install than its gas and oil fired cousins as well as meaning that there is more flexibility as to where the cooker can be located.

Purists will argue that the older gas and oil fired models were more solidly built though this is primarily because modern materials claim to offer better heat retention, so less metal is used in the more contemporary versions.

Servicing is another area where electric Agas are more cost-efficient, in general gas and oil versions tended to see their required service intervals shrink as they aged, so service costs rose year on year but the electric Aga can comfortably go 5 years between services and with no flue to keep clear or oil residues to clear/dispose of they are far cheaper and more efficiently maintained.

The original Aga had to be on constantly, so even when you weren’t at home it was happily burning through banknotes in your absence. Electric Agas offer the convenience of modern controls which allow the user to set timed operation to coincide with their own particular lifestyle needs and so can powered on/off at a whim. Anecdotal evidence does suggest that electric Agas tend to lose heat faster than their oil and gas fed cousins and that they can take longer to get up to “normal” operating temperatures, however the potential savings and convenience offered by the electric version would seem to far outweigh these issues especially for those confronted by the pressures and time constraints of modern life, especially given the reduced environmental impact, which leads us to……

We’ve already alluded to some of the ecological benefits of choosing an electric Aga and with the drive towards cleaner forms of energy to replace fossil fuels growing ever stronger it is not a point that should be dismissed.

Whilst we look for more ways of generating “cleaner” electricity it is also true that our reserves of fossil fuels such as gas and oil are becoming depleted. The likelihood is that the price of fossil fuels will continue to rise as they become more difficult to source and extract whilst electricity should become cheaper as more efficient production methods are developed. Purely from an ethical point of view it would seem logical to choose an electric Aga over any other.

There is of course the question of recycling. Whilst it is all well and good suggesting we all choose an electric Aga, what about those of us who already have a perfectly good oil or gas Aga and don’t see the sense in scrapping it? Agas (particularly the larger models) represent some pretty solid slabs of engineering  and disposing of them can prove difficult and expensive. Fortunately converting an Aga to electric is reasonably cheap and can be carried out on almost any model so you don’t necessarily have to dispose of your faithful old Aga in order to share many of the same benefits as would be the case with a modern electric version!

It is a testament to Dalén’s original design that Aga have managed to keep pace with the times without necessarily having had to reinvent the wheel, and quite possibly a major reason why Aga have remained a household name for so long. With such a solid heritage it is likely that the electric Aga will still be a fixture in homes across the country for years to come.