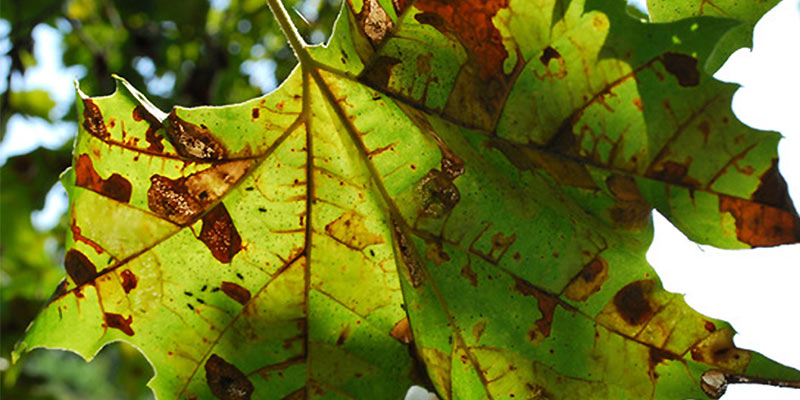 Properly caring for trees is an undertaking that requires a great deal of effort and preparation. It should begin before you pick out a tree and continue throughout the tree’s entire lifespan.

Tree care involves everything from watering to mulching to pruning and planting. Of course, trees are prone to developing diseases as well as infestations from various pests. You’ll want to ensure that you choose the healthiest trees possible and educate yourself on the various problems a tree can face. This article will help you identify and, if necessary, deal with some of the many common diseases that trees can develop.

This fungus has historically devastated chestnut trees throughout the United States, having killed over 4 billion trees during the first half of the 20th century. It was originally introduced to the United States from Japan and proceeded to spread all across the continent.

The spores are spread by the wind and enter the tree through wounds in the bark, where it spreads into the tree’s tissues. The first symptom will be a small orange-brown area on the bark, which quickly develops into a canker and eventually kills the tree. This fungus has caused the destruction of nearly the entire species of the American chestnut.

As the name states, this disease affects the roots of the tree. Depending on what species of tree is affected, it can impact the needles, twigs or branches of the plant as well. The Armillaria fungus comes in a variety of species and can therefore affect a huge variety of different plants; only the larch and birch trees are resistant to the fungus.

Depending on the host tree, the symptoms will manifest in a variety of different ways. The wood will become bleached as the tree cell walls degrade; the leaves or needles will fail to produce sufficient chlorophyll (a condition called chlorosis) and therefore become yellow or whitish; dieback of the twigs and branches can also occur.

Managing this condition involves several steps, including possibly fumigating the area to destroy the spores. Preventing wounds on the plant where the spores can enter is another major way to avoid root rot. To implement this, some tree trimming may be in order.

This fungus affects the roots of conifer plants. As a result, it mainly affects forests in the United States and is responsible for the loss of around one billion dollars a year. The spores are released in the summertime and carried by the wind.

As with the previous two entries, they attack the tree through wounds in the bark and colonize the roots. It can also infect trees that neighbor the host tree. This disease can become fatal to trees before any symptoms appear but visible symptoms can include abnormal needle growth, pale yellow bark, and distorted tree roots.

This disease can be managed by tree trimming, i.e. removing infected parts from the tree. Chemicals such as a urea solution can be administered immediately following infections to kill the fungal spores.

Another fungus, this disease is spread by the elm bark beetle. Originating in Asia, where the trees have developed a certain level of resistance, it has spread to North America, Europe, and New Zealand and killed vast amounts of native elm trees.

When the beetles feed upon the tree, the resulting tissue damage prevents water and nutrients from spreading throughout the rest of the tree. Symptoms of the disease include leaves withering and yellowing long before the autumn months; eventually the branches begin to die and finally the roots die from a lack of nutrition.

The disease is managed by pruning the diseased parts of the tree, managing the beetles with insecticides, and vaccinating trees from the fungus.

Mistletoe is a parasitic plant that attaches itself to a tree or shrub and leeches water and nutrition from its host. The most common example of this is the viscum album plant, also known as European mistletoe. It grows on the stems of other trees and has small, short leaves and small, yellow-green flowers. It is capable of killing the part of the tree it attaches to, or, if the infestation is too heavy, killing the entire tree. It is spread by birds that eat the seeds and deposit them upon other trees.

Fire blight is a disease that affects apple and pear trees. It is an extremely serious problem once it develops, capable of devastating entire orchards.

The most effective way of managing the disease is to frequently inspect the trees and prune any affected branches.

Another fungal disease, this particular infection is easy to identify due to its distinctive symptoms. White, powdery spots appear on the leaves of affected plants, generally affecting the lower leaves.

The fungus is transmitted by insects such as wooly aphids and can be controlled by certain chemicals; it can also be controlled organically with potassium bicarbonate.

If one of the trees in your yard is developing wounds, yellow leaves, or any of the aforementioned symptoms, a tree trimming may be all it takes to save preserve the look of your backyard.