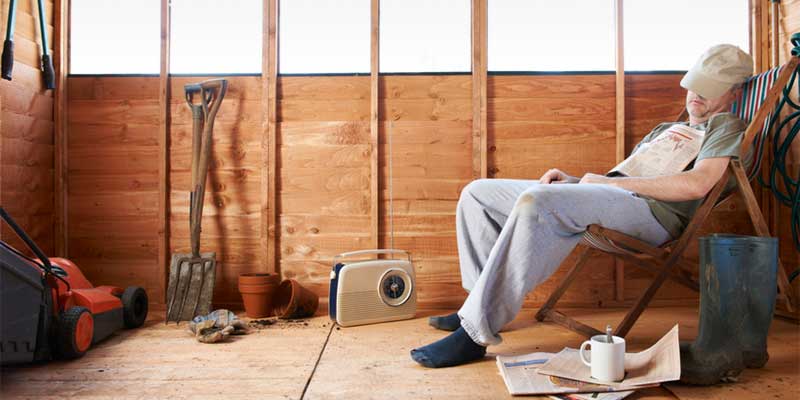 Our special guest author from Hortons Log Cabins gives us a female perspective on what men get up to in their man caves.

Since you agreed to your partner’s desperate need for a shed, you’ve pondered whether or not it was the right thing to do after all. Prior to the shed going up (or luxury portable cabin – another gripe, we’ll talk about that another time), you craved getting his sorry backside out of the house. Truth is he’s spending more and more time locked away in his man cave and now it’s quite frankly starting to grate.

While you were initially cock-a-hoop that he was out from under your feet, finally showing some interest in something other than football and food (and the obvious), you’re starting to feel a tad redundant.

Well I’m with you ladies. I mean what exactly is he doing in that shed for all of those hours? I’ve heard ‘oh just tinkering’ a thousand times! I’m curious. If he’s making me a diamond ring, or he’s working on some money-making scheme to ensure my luxury retirement, then I may well forgive him. But if tinkering involves drinking beers, and taking things apart and putting them back together again, I can’t say I’m very much a fan of the man-cave project at all.

In my desperate hours staring out of the kitchen window at the flickering light coming from the pimped up cabin at the end of the garden, I wonder what goes on inside my husband’s head. What exactly is he doing up there?

Well I don’t mind sharing with you that my curiosity got the better of me. I’ve been doing a bit of research about what it is exactly that men find to do for so many hours a day in such a confined space. My husband even has his own kettle and biscuit tin. He could survive for days. Working as an independent writer for Hortons Log Cabins, I have put together some of the weird and wonderful things I’ve discovered that men get up to in their sheds:

I kid you not. Fashionable reading includes 101 Things to do in a Shed by Rob Beattie, The Joy of Sheds; Because a Man’s Place isn’t in the Home by Frank Hopkinson and Men and Sheds by Gordon Thorburn. I’m stunned.

Hamsters, Guinea Pigs, even dare I say it rats have all been banned from the house because the smell is rank. If you are wondering why your husband has been smuggling bags of hay through the back gate, and he’s taken to eating extra fruit and raw vegetables, you may well have a serial, secret pet keeper on your hands. Or maybe he’s teaching his parrot to say kind things to your mother.

If there’s some kind of mid-life crisis going on, there could be a secret hobby on the go. Maybe he feels stupid saying he’s decided to learn a language, take up pottery or learn to dance. YouTube has everything you need these days to learn how to do virtually anything. If there are salsa tunes drifting from the end of the garden, don’t be surprised if you get whisked off your feet at the next family shindig.

Well you did ban his brewing activities from the house. Let’s face it the bucket of beer cooking in the corner of the kitchen wasn’t pleasant. We’ll let him off that one. As long as he doesn’t drink it all in one go.

You could probably lump this in with hobbies, but I wanted to distinguish between meaningful and virtuous hobbies, and completely pointless ‘that doesn’t even look like a matchstick dog’ hobbies. I know it sounds harsh, but I’ve never understood the impractical hobbyist trying to do a practical hobby. It’s a waste of match sticks. Just think how many ciggies we could have lit.

By this I mean sanding pieces of wood, sawing pieces of wood and banging nails into things. There’s a whole lot of sweat and tears going on in that shed, but strangely nothing ever seems to come out of it, apart from (on the odd occasion) your husband.

It’s the new guilty pleasure. Vlogging or watching vlogs. I can’t imagine you’ll get any more than a few minutes into this one, but if he’s vlogging, anyone can do it. Here’s Vlog or a man in a shed with a dressing gown talks rubbish! Oh dear I hope that’s not your husband, but at least you’ll now know exactly what he’s doing in that shed. It could be worse. Couldn’t it?

As for my man. I’m kinda missing him getting under my feet, that’s all. Am I jealous? I guess I am.